These are the varieties that I sell. Each has its own unique appeal, and if you taste a few, I’m sure that you’ll find your own favourites.
I take different varieties to each market, because they come into season at different times. Older varieties don’t crop regularly, so I won’t have all varieties every year.
Since I only have one or two trees of most varieties, you’ll need to get them while they’re there! Some will keep for ages; some need to be eaten straight away.
I’m still waiting for trees to mature, so the list will get longer as time passes.

Irish Peach
The earliest apple I grow, it has to be eaten really fresh, just after picking. It has a delicate sweet flavour. 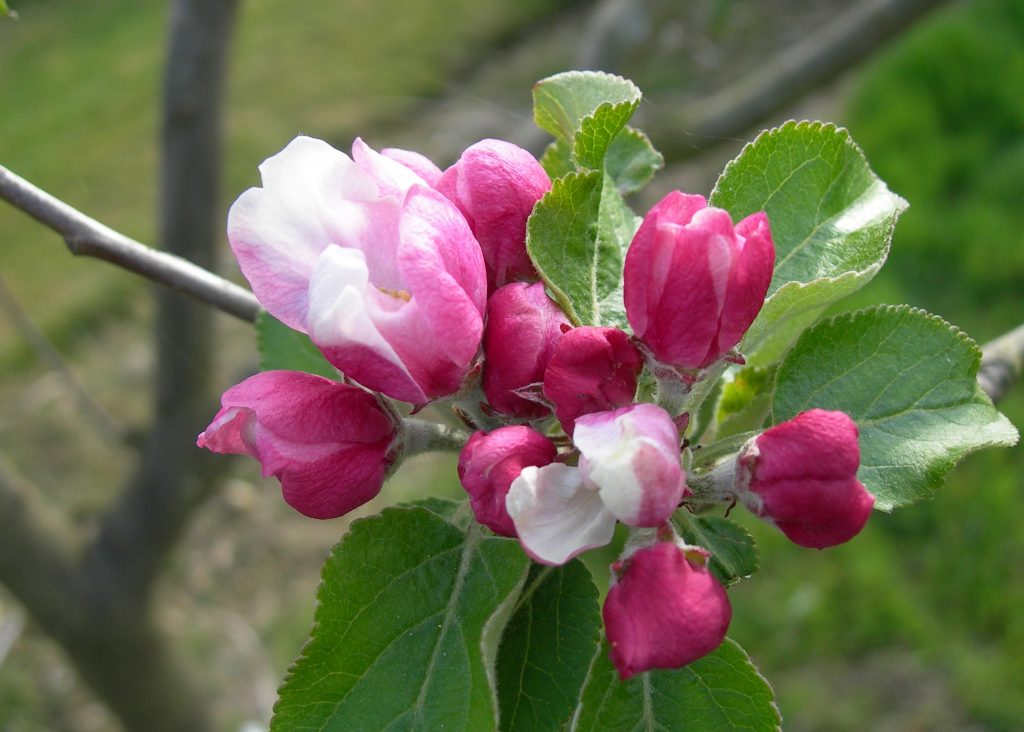 Irish Peach’s beautiful pink blossoms are the first to open each year, and really cheer me up in the spring.

Reverend Wilkes.
The earliest cooker, which is also eaten fresh by people who like a brisk and crunchy dessert apple. Delicate and somewhat pear-like flavour and texture. Great for baked apples. Some years The Reverend gives a good harvest, then often rests for a year.

St Edmunds Russet.
An early Russet, which tastes sweet and gorgeous. Unlike some russets, it won’t keep, so eat it fresh. A Victorian apple from Suffolk.

James Grieve
A large apple with a fresh and delicate flavour and really juicy, so it’s ideal for juicing. Originally from the Edinburgh area. Early to mid season.

Golden Noble.
A handsome apple and an excellent mid-season cooker with a nice flavour that doesn’t necessarily need sweetening. Cook with just a spoon or two of water to stop them burning and Golden Noble quickly forms a foamy white apple puree. Always popular. If left on the tree, Golden Noble becomes a soft and very juicy eater. Early to mid season.

Tom Putt.
A very old cider apple variety that makes good eating and can be used as a cooker. An odd shaped apple with a short season, so snap them up! Very few are grown now. Early to mid season.

Golden Bounty.
Beautiful golden desert apple bred in Hastings. A very rare variety now, and I doubt you’ll find anyone else offering them. A real favourite with a delicious flavour and wonderful juicy flesh. A non-keeper, so taste them while they’re in season. Mid season.

Peasegood Nonsuch
It really is something special! The beautifully coloured apples grow to an enormous size; one apple can weigh well over a pound!  When I planted it, I didn’t expect such a marvellous flavour. A superbly sweet and juicy eating apple. Mid season.

King of the Pippins.
A very old variety, whose origins are lost in antiquity. Very reliable and long keeping (hence the “King”). Delicious sweet flavour with crisp white flesh. Mid to late season.

Catshead
An odd-looking knobbly cooking apple, great for baking. Catshead cooks to a fluff, a bit like a Bramley but with a better taste. Fantastic for baked apples: remove the core, put raisins/sugar/cinnamon in the hole, pop them in the oven and you’ve got a fantastic dessert. Don’t forget the custard! Mid to late season.

Golden Harvey.
Also called Brandy Apple. The small very sweet apple, which appeals to children. It was used to make strong cider and apple brandy, due to the high sugar content of the juice. If you boil a few, roughly sliced, you get a fantastic refreshing apple tea. Mid to late season.

Pitmaston Pineapple.
My personal favourite. Small yellow apples with a flavour reminiscent of tropical fruit. I keep them in the van to munch on while I’m driving. Mid to late season.

Spartan.
A very special dark red desert apple with creamy flesh. Sweet and rich. Usually very popular so they disappear quickly. Spartan apples can vary. I had mine specially grafted from a particularly good tree I knew. Mid to late season.

William Crump.
A bright red late-season desert apple with a very special rich flavour, it has the strongest apple taste of any apple I’ve eaten (if you see what I mean). You’ll understand if you try it. Originating in the English Midlands.

D’Arcy Spice.
This dull-looking apple hides a unique flavour, unlike any other apple I’ve tasted. It’s sweet and aromatic. One of the best late season apples, it improves with keeping.

Norfolk Biffin.
An historic and wonderful cooking apple. (Dickens talks of them in A Christmas Carol and The Norfolk country parson and diarist, James Woodforde made frequent references to his ” Beefans”, in The Diary of a Country Parson 1758-81). Norfolk Biffins have an intriguing toffee-like flavour when cooked. Extremely versatile, with many uses and very long keeping. Late season.

Ashmead’s Kernel
The classic late English dessert apple par excellence. Flavour rich, sweet and complex. A long keeper, which improves over time. If you can store them until after Christmas, they are the best!